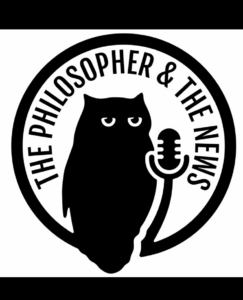 TPM: Tell us about your podcast.

The podcast is called The Philosopher &amp; The News and it does what it says in the title: In each episode I interview a philosopher about the philosophical questions and ideas hidden behind the biggest news stories. The podcast is created in partnership with The Philosopher journal, who cover the production costs. More recently the journal’s editor, Anthony Morgan, has also been helping with the research for each episode, and Olive Richardson, a volunteer for the journal, has been helping with the editing. You can find it wherever you listen to podcasts, and here: www.thephilosopher1923.org/podcast

TPM: Why did you start doing a podcast?

Sometime in the fall of 2020 The Philosopher journal invited me to do an online interview with a philosopher of technology, Carissa Véliz, on her book Privacy is Power. I enjoyed the experience so much – the preparation for it, reading the book, trying to think about good questions to ask, and then the actual interview discussion – that I wanted to do more! But the podcast is mainly a product of my overall desire to bring philosophy in contact with what is happening around us and explore the ideas that can help us understand the times we’re living through.

TPM: What are the best three episodes you’ve aired so far, in your opinion?

Even though I was very nervous at the time, the very first episode remains my favourite. It was with David Runciman (who of course has his own excellent podcast, Talking Politics), and we recorded soon after the storming of the US Capitol in January. I was originally planning on discussing the nature of political representation against the backdrop of Biden’s then upcoming inauguration, but the turn of events meant we spent a lot of time talking about representation through the lens of the insurrection. It felt exactly like what I wanted the podcast to be: a discussion of ideas but in the most fresh, alive context. We also got into meaty philosophical stuff like what Thomas Hobbes meant when he suggested the concept of “the people” is a fiction.

Another episode I really enjoyed was on vaccine hesitancy with Maya Goldenberg. Maya wrote a book called Vaccine Hesitancy: Public Trust, Expertise and the War on Science before the pandemic even started – best timing ever! Maya argues convincingly that vaccine hesitancy can’t be explained by people’s ignorance or anti-science attitudes, but by the broken relationship of trust between the public, scientists and the bodies they advise. Tackling vaccine hesitancy requires regaining that trust by listening to the public’s concerns, not ridiculing them. Maya changed how I think about this issue, and I’ve had listeners tell me the same.

Finally the episode that had the greatest emotional and humbling effect on me was the one with Olúfémi Táíwò on why America needs a Truth and Reconciliation Commission. The episode was recorded a year after George Floyd’s death, and Táiwò so graciously and patiently explained why racism will not be defeated until America admits to the huge role slavery, violence and cruelty against black people played in the creation of the wealth it enjoys today.

TPM: Can you recommend one other philosophical podcast and tell us about one good episode?

Hard to choose, but I’ll pick Hi-Phi Nation, by Barry Lam. As far as I know it was the first philosophy podcast to use narrative as a way of talking about ideas. It moves beyond the straight podcast interview format (though the episodes also include interviews with philosophers) and introduces the listener more gently through a story that doesn’t seem to have anything particularly philosophical about it. I still remember an episode from the first series about the philosophy behind song covers that starts with the backstory of the song American Pie by Don McLean. Great stuff.

TPM: Besides straight up philosophy podcasts, could you recommend another podcast?

It’s not exactly a cool niche podcast, especially now that it’s with the New York Times, but I am a big fan of The Ezra Klein Show. Ezra Klein is such a great interviewer. He’s a careful and charitable reader of people’s work, articulates thoughtful questions, and is a really engaged listener – his follow up questions are proof that he is thinking in the moment, something I’ve realised is quite hard to do during a recording! I’ve learnt a lot from his interviews and found out about people I wouldn’t have otherwise. Also, great final question. I’ve actually stolen that one.