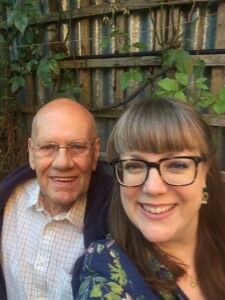 Once you start noticing it, death is everywhere. I write this about a week after the death of my father. In the immediate aftermath, I implemented an “only light tv programmes” policy, but in the first five minutes of the Australian comedy Why are You Like This? (which I can highly recommend), there was mention of a character missing the phone call of her father’s death; while in my other lightweight option, Sweet Tooth—*spoiler alert*—the dad dies in the first episode, leaving his half-human-half-deer son all alone. So evidently, we can’t avoid death, even if we try, but this banal observation has more philosophical significance than it may first appear.

In his magnum opus Being and Time, the 20th century German philosopher Martin Heidegger analyses the significance of death with regard to what it reveals about our distinctive existence. Heidegger argues that “death reveals itself as that possibility which is one’s ownmost, which is non-relational, and which is not to be outstripped.” Death individualises us, no one can die our death for us. Even if someone sacrifices themselves for us, this does not take our death away from us. It is our final possibility: the possibility of our impossibility, and a possibility we cannot escape. We are all “Being-towards-death,” but this does not mean we always face up to our death: “proximally and for the most part Dasein [the human agent] covers up its ownmost Being-towards-death, fleeing in the face of it.” Heidegger is particularly interested in the way we flee in the face of our own death, but his analysis can also usefully illuminate the ways in which we relate to (or fail to relate to) the death of others.

In the week since my father’s death, I have found myself — in a way that has surprised me –avoiding death metaphors. It often seems more natural or appropriate to say “my father passed away,” but I have sensed in myself a refusal to use such language, instead opting for “my father has died.” Metaphorical language seems inappropriate, a kind of evasion, a way to remain detached from the reality of what has happened. Heidegger argues that in the “public way of interpreting, it is said that ‘one dies’.” Talking of people “passing away” or “moving on” seems similarly evasive. The “consolation” that the public discourse around death offers us, Heidegger argues, is “a constant tranquilisation about death. At bottom… this is a tranquilisation not only for him who is ‘dying’ but just as much for those who ‘console’ him.” I leave uninterrogated here Heidegger’s claim regarding how we should relate to our own death, and whether it is even possible to be-towards-death consistently in the way he describes. Instead, I want to focus on the ideas of “consolation” and “tranquilisation” in the public scripts, practices and discourses around death, the way these can prevent people from genuinely connecting with what has happened, and how they can further exacerbate the distress of the person who is grieving.

My father died in a care home. I received the call informing me of his death in the late evening. After brusquely being told he had died, I was informed that I needed to arrange collection of the body within two hours. The woman who told me of his death—let’s call her Tina, because that was her name—was unsympathetic. She just about remembered to say “I’m sorry for your loss,” or words to that effect, before she hung up. She was not performing any kind of consolation and was far more concerned with the admin. Although she avoided obscuring and metaphorical language, she did not seem to inhabit a more “authentic” relation to death. Rather, she seemed to embody an attitude Heidegger describes in terms of encountering death “as a well-known event occurring within the world… one of these days one will die too, in the end; but right now, it has nothing to do with us.” Tina certainly gave the impression that my father’s death had nothing to do with her, and wanted to discharge her responsibilities as quickly as possible.

After phoning and telling my mum what had happened, I then had to engage in the farcical business of finding the only 24-hour funeral director in my parents’ town (contrary to the nursing home’s claim that all funeral directors are 24-hour). I was transferred to a call centre hundreds of miles from where my parents live. I was put through to a well-meaning, but not strikingly competent man to whom I had to spell out every single piece of information I gave him multiple times before it could be entered into the computer system, which then of course promptly crashed, meaning I had to go through the whole business all over again. This is not what I had imagined doing 20 minutes after discovering my father had died.

In the last week, many people and institutions I have dealt with in a formal capacity have tagged on “my condolences” to the end of their speech, or the slightly warmer “I’m sorry for your loss” or “our thoughts are with you and your family.” It is of course difficult to know what to say when someone has died, so these phrases or “scripts” provide an easy go-to, but at the same time they can be used to avoid or evade a genuine engagement with the event of someone’s death, and with the person who is grieving. Such condolences are particularly grating when they appear to stand in place of basic competence. If someone is telling you they’re “very sorry for your loss” at the same time as omitting vital information from a form they’re supposed to have filled in so that you can register a death; or forgetting key items when packing up your dead relative’s belongings for you, it can be rather hard to stomach, and to take these sentiments seriously. In these instances, social scripts stand in for compassion and take the place of genuine competence, something which would be far more welcome at a time when you’re trying to process a mountain of bureaucracy whilst not crying down the phone.

Everyone grieves and deals with death differently. I am very lucky that most of my friends know that I talk about things, even shocking things, frankly and with humour. But even knowing this, it still feels like there is a level of performativity that is expected. If you don’t cry in public, are you really hurting? If you don’t say how terrible you feel, were you even close to your loved one? Even among the most understanding friends and colleagues, it can still feel like there are certain expectations of how sombre you should be, and what you should or should not be doing. However, the sheer amount of admin death requires means that if you are fulfilling the performative role of a grieving child or widow, you wouldn’t actually be able to get any of this done. I am very grateful that the funeral directors, the coffin makers and the crematorium have been very helpful and friendly. They don’t baulk if you make a joke or meet you with a stony silence that implies this is not how you should be conducting yourself.

I was extremely close to my dad. He was an advertising director, a yacht master instructor, and then a “stay at home dad” before it was cool (although everyone always mistook him for my grandfather). He encouraged me to be confident and fearless, and he always supported my career. He would read all of my work, and kept a philosophical dictionary by his bed so he could look up terms he didn’t understand. He was funny and sociable and outgoing, and he and my mum provided me the best upbringing anyone could ask for. We were a little gang, us against the world, and we had an incredibly open and honest relationship. This has been enormously helpful in the last week, as it means I have had a very clear idea about what my dad wanted regarding his death and funeral arrangements, because we’d talked about it so many times. I even had a photocopy of the business card of the person he wanted to make his coffin, so I knew exactly who to call. This openness and honesty in our relationship, and in our conversations about death, is contrary to the normal evasiveness, tranquilisation and consolation Heidegger describes. The fact that, as a family, we had this openness has made the whole process of dealing with his death much easier than it could have been, which is not to say it has been easy. But at least I feel I’m doing the right thing, even if it doesn’t always conform to the standard conventions and scripts of how one should deal with death. My dad wasn’t very conventional though, so this too seems rather fitting.

Charlotte Knowles is an assistant professor, working in the department of ethics, social and political philosophy at the University of Groningen. Her most recent paper has been shortlisted for the Robert Papazian essay prize and will be published in a special issue of the International Journal of Philosophical Studies. You can follow Charlotte on twitter (@charknowlez).