George Berkeley (1685-1753) is widely regarded as a loony. He was not a loony. He was a bishop. I do not here mean to imply that a religious bent precludes insanity. It is rather that this particular lunacy was ascribed to Berkeley over and above that freely attributed to him as a man of the cloth. Moreover, this predication of psychosis was in spite of Berkeley’s evident wit, wisdom and wile whilst writing on topics diverse as the calculus, natural law, optics, politics, poverty and, somewhat incongruously, tar-water. Why then was Berkeley seen as having taken leave of his senses? Ironically, it was because he beseeched us to pay strict attention to the evidence of their testimony.

Berkeley made a quite remarkable claim: there is no such thing as matter. Put so bluntly, this sounds ridiculous. No trousers or Meccano? No chifferobes or lariats? This must be manifest derangement. Not quite. Berkeley was an undergraduate of Trinity College Dublin. A few years prior to his matriculation, William Molyneaux, another Dubliner, entered into an exchange of letters with John Locke. Molyneaux was impressed with his correspondent’s lately published work, the Essay Concerning Human Understanding. Molyneaux enjoined all of Dublin’s literati to embrace the book. Thus by the time Berkeley came to Trinity, the only book on the curriculum worth studying was Locke’s majestic text. Berkeley’s claims were reactions to and extensions of Locke’s empiricism. Locke’s principal principle was that the foundation of our knowledge were ideas perceived by sensation. Berkeley agreed with this fundamental assumption and, on this basis, took a survey of everything that could exist. He concluded that they were those things either perceived or perceiving – our ideas or ourselves. But what of matter? According to Locke, matter was the unperceived cause of our ideas. Moreover, it was inert and senseless – the very antithesis of the spiritual. It neither perceived itself nor was perceived by others. How then, asked Berkeley, could it be said to exist? To say that it existed was simply a contradiction – to exist was to perceive or to be perceived and ‘matter’ evidently did neither.

What, then, were radiators and ball-point pens? They always were, replied Berkeley, ‘collections of sensations’. What is it to say that ‘there was a note in G flat’? That it was heard. What is it to say that ‘there was a shade of cerise’? That it was seen. What is it, at the end of the day, to say ‘there was a pump-action shotgun’? That it was seen, heard, felt, tasted and smelt. Without these there would simply be no shotgun. The shotgun just is the collection of sights, sounds, smells, tastes and textures. Aside from the fact that this inscrutable matter is inherently contradictory, there is no need to posit it as responsible for these sensations – after all, what does this matter add that was not there already? We were quite happy with the shotgun as seen, heard and tasted etc. without tagging on some ‘matter’ which serves no useful purpose whatsoever. Matter is simply redundant. This, Berkeley claimed, was mere common sense – what are objects over and above what we take them to be in everyday life? What, more to the point, are the products of these everyday interactions but our perceptions of these objects? It is only when you start introducing ‘matter’ that you begin worry about the verity of the senses and trouble yourself with scepticism. By ridding the world of matter, Berkeley hoped to relieve philosophy of this burden.

But, it was objected, if all an object amounts to is a collection of sensations, what happens to it when there is no-one around doing any perceiving? Furthermore, how it is that these sensations of smell, colour and taste etc. always ‘hang together’ so well? How does it so happen that when I see the shape and colour of the shotgun, it is always accompanied by the texture and smell I am accustomed to? Bishop Berkeley (for let us not forget that he was ecclesiastic) thought the answer rather obvious. Why exactly is it that there is such order and consistency in the patterns of our ideas? Why do our sensations warn us of things that are harmful? These good and advantageous things speak of a benevolent author, one, moreover much more powerful than ourselves. What could be responsible for ideas but another spirit – for where can ideas exist but in minds? There simply must be a massively powerful mind that is benevolent in the extreme. God is responsible for these benefactions. God stands on perpetual perceptual sentry duty for objects when no-one else is looking.

This brief summary of Berkeley’s thought is surely not enough to convince the reader of the truth of Berkeley’s views, nor will it convey the subtlety of their exposition. It does not adequately expiate upon Berkeley’s enduring influence. It in no way captures the quality of Berkeley’s writing, for he was surely as eloquent a man of letters as he was a philosopher and George Berkeley was as sophisticated and intelligent a philosopher as the British Isles have ever produced. But the most notable lack in this short introduction is a failure to convey the sheer beauty of Berkeley’s vision. He was a deeply religious man and the place for God in his system, as the benevolent immanent cause of the entire world, is intimate, awesome and compelling. His was a consistent Christian vision that even the most hard-headed atheist cannot fail to respect. 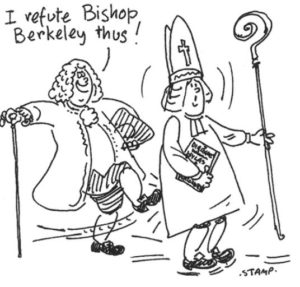